BW Galerija Shopping Mall is Serbia's largest shopping mall and Belgrade's latest attraction. Located in the Belgrade Waterfront district on the banks of the River Sava, BW Galerija is home to outstanding retail facilities and recreational areas for the residents of Belgrade and visitors alike.

Architects and engineers from RTKL and Arhi.pro strove to replicate the existing street grid of Belgrade within the mall. The ambitious design incorporates a series of "open" internal public streets covered in ETFE cushions that create an instant connection between the mall and the beautiful waterfront along the river Sava. Temme // Obermeier was appointed by the client as nominated subcontractor to the Main Contractor, Gradina to complete the detailed design and install the seven ETFE roofs. The beautiful 46-meter transparent domed roof is a fitting entrance to BW Galerija.

Special thanks to the Serbian President Vucic who compared BW Galerija Belgrade to one of our other projects: "These ETFE cushions are even better than the ones at the Allianz Arena in Munich" 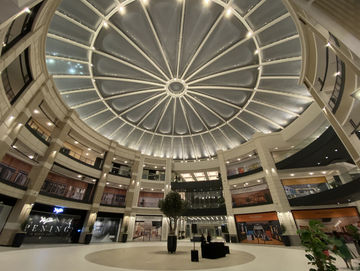